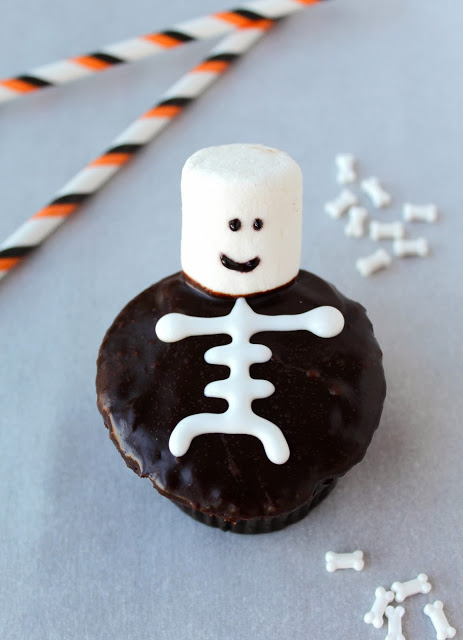 Happy Monday! I can’t believe that Halloween is less than two weeks away. Seriously where does the time go? This week I thought I would share a few more Halloween-inspired desserts in order to get ready for the holiday. For some reason, I am much more creative with my Halloween baking than I am at any other time of the year. It is just so fun to create Halloween cupcakes. In the past I have made Spider Cupcakes and Bat Cupcakes, both of which were really cute and a big hit with everyone that I shared them with. And then this weekend I made Chocolate Skeleton Cupcakes, along with one other cupcake recipe that I will share later in the week.

You really can use any cupcake recipe you want to make these Skeleton Cupcakes. The recipe I used, which I linked to below, just happens to be my favorite one-bowl chocolate cupcake recipe. It is the same recipe I used to make all of the other Halloween cupcakes on my blog. But feel free to make vanilla cupcakes or any other flavor of your choice. Personally I would choose chocolate nine times out of ten. To draw the skeleton’s body and face, I used Wilton frosting pens that I picked up at a local craft store. Although I haven’t tried it, I would think you could also melt some chocolate and white chocolate chips and pipe the chocolate onto the cupcakes using a plastic bag or squeeze bottle. Enjoy! 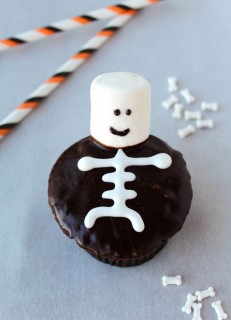