The combination of Father’s Day and my cousin Erin’s Confirmation created the perfect excuse to make cupcakes this past weekend. Not that I won’t bake cupcakes any other day, but I can never pass up the opportunity to bake them for a party. Especially when there will be a bunch of kids at the party, cupcakes are guaranteed to be a crowd-pleaser. I made two different cupcakes for the party- these Cherry Almond Vanilla cupcakes and another recipes I am excited to share later this week.

I came across this recipe in a special edition magazine released by Better Homes and Garden a few months ago and immediately put it on my must-bake list. Aren’t they so cute? They might be the cutest cupcakes I have ever made. I love that the cherries make both the cupcake batter and the frosting a pretty pink color. There is also no shortage of cherry flavor. There is even a hidden cherry baked in to the middle of each cupcake- so fun! My family loved the Cherry Almond Vanilla Cupcakes and I am sure yours will too. 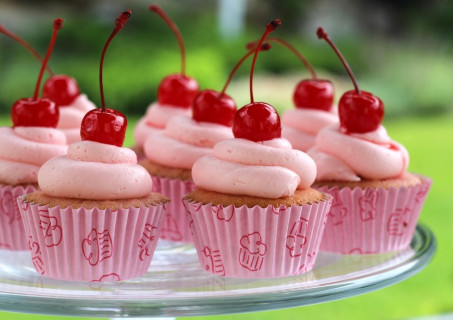