I hope that you all had a wonderful Thanksgiving yesterday! Ours was filled with family fun and delicious food. Earlier in the week I mentioned that I was bringing cupcakes to our Thanksgiving dinner. Cupcakes are certainly not your typical Thanksgiving dessert but I loved the way that these turned out.

The cupcakes mimic a more traditional sweet potato pie in that they have a graham cracker crust and a sweet marshmallow frosting on top. For a little added sweetness, I sprinkled some of the cupcakes with chopped pecans and cinnamon, but of course that is just optional. These cupcakes are a great alternative to a homemade pie, which takes a lot more time and effort to whip up.

Do you guys do any shopping on Black Friday? I have never camped outside or waited in any long lines before. I would much rather find some good deals online and do my all my shopping that way.  I do need to get started on my Christmas shopping soon though, it will be here before we know it! 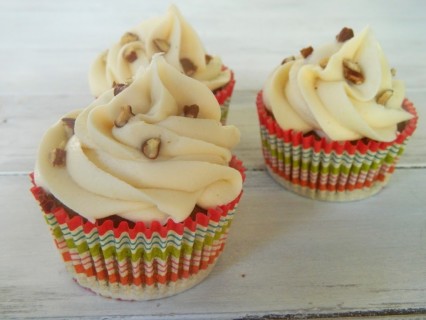 Source: Recipe from How Sweet It Is